In many aspects, ancient Rome was a modern state. They had city planning, sewage, hot baths, heated floors, elaborate customs, traditions, and a rich culture. After the fall of Rome, there was a brief “dark ages” in which much of the technology and culture of Rome disappeared. That period is not as long as some would have you think (a subject discussed in the Old Western Culture curriculum), but there was a decline.

But when we think back to Rome’s height, we normally think of its technology, conquests, or even its debauchery as it declined. But what about ancient Rome’s fashion?

A Little introduction to Roman Fashion

Men: The basic garment was a tunic, often belted. On top of this was worn the well-known toga–but not as universally as we might think. Togas were a sign of status, and could only be worn by Roman citizens. Social classes were strictly defined, and clothing reflected this. A thin red stripe on your tunic indicated that you were from the equestrian class, and not of the common rabble. A broader red stripe indicated the senatorial class. Except for certain special instances, togas were always white. Cleaners even used urine to bleach them! Togas were not practical to wear, though, and gradually became more ceremonial rather than an everyday social garment. Hair became more complicated under some emperors, and Nero is said to have made curled hair popular among men. Beards were popular later on in the empire. 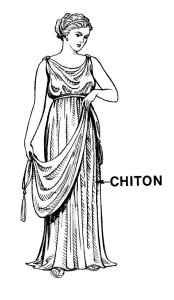 Women: The basic garment was a tunic, either in the Greek style of a chiton, or a peplos. Both of these were simple, loose-fitted, long dresses attaching at the shoulder, often with brooches. Once a woman married, she began to wear a stola, a long, draped garment. Respectable women under the empire, however, never wore togas–to do so meant you were either a prostitute or adulteress. Hair was a platform for a great deal of opulent creativity, and could give our most elaborate modern stylists a run for their money. Piles of curls, wigs, gold hairnets, coils of braids, finger waves, and more were common, and women were expected to spend a great deal of time on fixing it. They even had special servants, called ornatrices, to fix their hair for them.

To give a fun, imaginative, (and anachronistic) peek into what Rome’s fashion was like, here is what a Roman “fashion magazine” might look like. Volgo means “everywhere” in Latin, and is from the verb “to publish.” And now you know where Vogue magazine got their name.

Engraved Weekly in the Central Quarries. Also available for wax tablet.
Subscribe to our carrier pigeon service for daily tweets.
Sold wherever Latin is spoken.

This hot off the chisel from our Rome correspondent, who’s been attending the Rome Fashion Week. Rumor has it the event was so huge, it spilled into the Forum! It’s as busy as a market! Delegates from all over the empire attended. At times, there were so many tribes present, it felt like a barbarian invasion! The Parisii(1) of Gaul were the featured delegation premiering their new collection, which included striped braccae, or breeches.

Though popular around the Gaulish and Germanic provinces, these were not well-received in our Roman patria. Some conservative patricians expressed concern over the moral laxity of allowing breeches at the exposition, but we believe there is no cause for alarm at these avant-garde fashions. The traditional, masculine tunica and toga will always prevail against these effeminate barbarian fad fashions.(2)

Word has it that the peplos tunic is giving way to the Greek chiton tunic! Of course, the married matrona(3) already wears a draped stola over her tunic, so this is hardly big news, but for the singles ladies who can’t wear the stola yet, this is a big step! Many chiton advocates claim it is much more flattering than the looser folds of the peplos, and has a more elegant sleeve.

Gone are the days of our grandmothers’s simple tresses. Volume is the key word in our modern day! It may take more than one servant to help you put it up in coils and curls, but it is worth the elegance! Why should men have all the fun of curling irons for their carefully arranged locks? Here are some of our favorite styles, one of which is said to be inspired by empress Julia Domna. Just be sure to set aside a few hours to work on them!

Epistulae(4) to the Front:

Salvete(5), ladies. So your man is off to fight in the empire’s service. Here are some ways you can help your miles’ morale as he helps to keep the barbarians across the Rhine.
— Sew him some braccae! Yes, I know Emperor Honorius banned them in Rome, but it’s different in the North. Out there, across the frozen wastelands of beer-drinking barbarians, breeches are a necessity of life. Don’t worry, it’s not as though the whole empire would ever start wearing them!
— Weave a scarf to protect his neck from chafing under the armor.
— Don’t forget to save metal scraps for shield and greave repairs!
— Write him often! With the new Roman road network leading across Gaul, sending letters to the front isn’t the ordeal it used to be!

The Aedile(6) arrested three men this week for unlawfully wearing the senatorial stripe on their togas, and another for wearing the equestrian class stripe. This, of course, is a grave offense, as only the equestrian and senatorial ranks are allowed the stripe on their togas. The way these plebians get above themselves! Later in the week, a campaign began to eradicate female-toga wearers from public places. If a woman wants to wear a toga in a red-light district, fine–but let us respectable matrons set the tone with our stola in the forum.

Laundry got you down? Live like a patrician, and try Marcus’ Fuller Service! Located near the entrance to the Forum Bovarium, near the Portus Tiberinus. We offer the best bleaching services for togae and stolae in the seven hills!

NOTE FROM THE EDITOR:

The editorial staff would like to apologize for the lateness of the Alexandria fashion report–a miscommunication in hieroglyphs occurred. Interpreters at Rosetta in Egypt are working to crack the code and teach Latin to the Egyptian correspondent, as we’re all very eager to know what Cleopatra was wearing when she hosted Marc Anthony.

*NOTES:
1. The Parisii were the tribe of Gauls who gave their name to the city then called Lutecia and now known as Paris.
2. Breeches, called braccae, were worn by Gauls and German tribes, and were viewed as effeminate for Romans to wear. The emperor Honorius banned them in the 4th century AD. However, Roman soldiers fighting in their mediterranean uniforms in the northern climates found them very practical in braving the cold weather, and they became an accepted part of military gear.
3. Matrona is equivalent to our English “matron,” a married woman.
4. Epistulae – Letters
5. Salvete – (salve in the singular) was a common Latin greeting.
6. The Aedile – Aediles were elected officers who helped maintain public order.

"Redeem the Time" discount on ALL curriculum! Use code "redeemthetime" for 25% off at checkout until 04/15. Dismiss