The Mirror of all Christian Kings

The Mirror of all Christian King

There is a famous line in the play which calls Henry “the mirror of all Christian kings.” What does Shakespeare tell us about his ideals of kingship through Henry V? Let’s look at some examples:

He is valiant. We began to see this in Henry IV Part One, when Henry is wounded, he keeps fighting. In Henry V, he courageously leads his men, both at Harfleur and Agincourt. He sends away the French herald who has come to arrange ransom in advance, telling the herald that he would rather die than be captured and ransomed.

He is just. Henry wants to be sure that his claim to the French throne—and therefore the war he is raging—is just, asking for the sincere advice of the bishop of Canterbury in a long conversation (Henry V, 1.2). Later, during the campaign, his old tavern companion, Bardolph is caught stealing. The king upholds the sentence of hanging, and then declares that “we give express charge that…there be nothing compelled from the villages, nothing taken but paid for, none of the French upbraided or abused in disdainful language…” (Henry V, 3.6)

He is merciful. Though he uses strong threats when addressing the besieged Harfleur, he tells his aide to be merciful to them when they surrender. He does not prosecute the man who challenged him unknowingly to fight.

He is honor-driven. In the famous “St. Crispin’s Day Speech,” when his cousin wishes they had with them more of the men they left in England, Henry replies “…I would not lose so great an honor as one man more, methinks, would share with me, for the best hope I have. O, do not wish one more!” (4.3) How different from another of Shakespeare’s characters, the inimitable Falstaff! Falstaff disdains honor as a mere word that can do nothing to help the soldier who died in its name. (Henry IV, Part I, 5.1). Henry, on the other hand, cares not whether or not he dies so long as he has honor.

Non nobis Domine, non nobis,
sed nomini tuo da gloriam
Not unto us, O Lord, not unto us,
but to Your name give glory.

He is humble. More so than one would typically expect of royalty—and certainly more so than his cocky French enemies! He sees the king as another man with an extra load of responsibility, not as a god among men. After the battle, he refuses to take glory for the incredible victory, or to let his men do so. Instead, he orders that the Non Nobis and Te Deum be sung. When he engages in a different kind of campaign, the campaign to woo a princess’ heart, he is self-deprecating about his ability to woo either with words (“I am glad thou canst speak no better English, [Kate,] for if thou couldst, thou wouldst think I had sold my farm to buy my crown.”) or with good looks (“If thou canst love a fellow…whose face is not worth sunburning, that never looks in his glass for love of anything he sees there…”)(Henry V 5.2).

He is devout. His piety is not simply put on for the show—in his most intimate moments, it is what shapes him. Before the Battle of Agincourt, he muses alone and then prays a heartfelt prayer for help and forgiveness for his father’s sin. In the opening scene of the play, the Bishop of Ely calls Henry “a true love of the holy Church” (Henry V 1.1)

He is crowned. The crux of his development as a character lies in taking up the royal crown and scepter. If “the mission makes the man, ” by extension, there is a sense in which the crown makes the man. A crown is a symbol of responsibility. It is a mission and covenant. It is a great privilege, but one that can be misused.

King Richard II, the shallow and unjust king whom Henry V’s father deposed, took this mission and the concept of divine right in the wrong sense and perverted it, using his position for license. Henry V understood this mission and divine right (hence his guilt over his father’s murder of Richard) in a much truer sense than Richard. 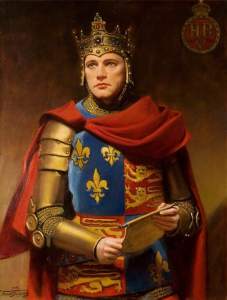 The crown, he realizes, is not a tool that he can use; rather it represents a higher authority that will turn him into a tool to serve others. He must decrease in order for his people to increase. In fact, perhaps a better description of this relationship would be “divine covenant.” By taking up the crown, Henry has sacrificed his own desires, put away “the old man,” and become a new creation of sorts. Henry discusses some of these sacrifices in his pre-battle musings on the nature of ceremony, saying that the peasant little knows “What watch the king keeps to maintain the peace, whose hours the peasant best advantages” (Henry V 4.1)

It is not inappropriate to say that coming into the kingship required a kind of conversion on Henry’s part. This is where Richard II failed. Richard was under the same set of covenantal obligations as Henry V, but rejected those obligations. As a result, he was pruned from the tree of royalty, cut off from the kingly covenant. This does not excuse Henry V’s father, Henry IV, from the responsibility of having done the deposing, but it does help us understand Henry V in contrast to his predecessors. Called to the kingship, he has become something greater and nobler than himself.