BLOG | Women of the Reformation

The Story of Marie Durand, a Huguenot Woman of Faith

Marie Durand, ( 1711-1776)  spent 38 years in jail for the crime of honoring God over man’s laws. Originally posted at Huguenot Heritage.

My Huguenot ancestors were known to be courageous and strong in their faith. They believed in salvation by faith in Christ and Christ alone. Many had to pay a high price for their religious convictions. Their desire was to please God above all else. They understood that God’s Word is the authority that governs all of life. No human law is above God’s law. The Huguenots stood by that, even if it meant being imprisoned, tortured, or put to death. An example of one of these great Huguenots was a woman named Marie Durand.

The revocation of the Edict of Nantes ( 1685) made it impossible for the Protestants to freely worship the Triune God. Marie Durand was born 30 years after that revocation, but it was still illegal for the French Huguenots to gather for a worship service. From her youngest days, Marie was used to hiding in order to read her Bible and in order to gather with other like-minded believers; all worship services were clandestine, and were called the “Assemblées du Désert,” the Assemblies of the Desert. Both of Marie’s parents were denounced by neighbors for breaking the law by participating in these underground worship services. They were sent to prison, where they eventually died.

What was their crime? They disobeyed the law of the land that forbade them to follow their Christian convictions, which denied them the right to freely worship the Triune God.

Marie Durand’s brother, Pierre Durand, was a Huguenot pastor and a gifted preacher in these secret Huguenot meetings. He, too, was betrayed, captured, and sentenced to death. What was his crime? He broke the law of the land by preaching God’s Word.

Left completely alone, 19-year-old Marie Durand married Matthieu Serre in April 1730. A few months later, her husband was arrested and sent to prison because his wedding ceremony took place in an “illegal” Huguenot service. His “crime” kept him a prisoner there for 20 years.

A month after Pierre’s arrest, Marie was sent to jail for the crime of being the sister of a Huguenot pastor. She was an active member of a Huguenot congregation, and was imprisoned for the crime of serving God according to her conscience when man’s laws forbade it. This 19-year-old newly-wed was sent to the infamous “Tour de Constance”, in the city of Aigues-Mortes, a prison that I visited a few years ago. The place was awful! The Tour de Constance is a circular stone tower, a merciless prison with no comfort, little air, and almost no light. Above the main floor is a six-foot high hole that let rain and snow into the room where the prisoners lived. Hot in the summer, cold in the winter, this jail held over forty Huguenot women who were packed in there for many decades.

At 19 years of age, Marie Durand was the youngest prisoner, yet the most mature Christian. Her Christian training at home from godly parents and a godly older brother enabled her by God’s grace to be light in this dark place for the next 38 years of her life. She had already experienced much suffering, and was able in the midst of this new suffering to encourage older fellow prisoners. She was a gifted writer and sent out much gracious correspondence from her miserable confinement. From her letters we know that each evening she gathered the women to read the Bible, to pray, and to sing Psalms together. She encouraged her sisters in Christ to fight against the temptation of abjuring their faith. A priest was available at the prison twenty-four hours a day, and only one word of renunciation of the faith from a prisoner would gain her freedom. All that a prisoner had to say was, “I recant,” and freedom would be granted. But these women preferred obedience to God over temporary freedom. Their conscience was free and at peace. During my visit to this prison, I saw the word “régister”—resist!—clearly engraved in the rock of the prison wall where Marie lived most of her life. These persevering women of great faith never gave up!

Marie Durand was released in 1768, and returned to her home in Bouchet de Pransles. She died eight years later. She is now a part of the glorious cloud of witnesses cheering us on as we await the return of the King of Kings, the Lord of Lords–Jesus Christ.

As Christians, our freedom of religion and conscience is still today a major issue in Western societies. But as it was for my ancestors, we will always be called to submit the law of the Land to the higher Law of God. When there is a conflict between the two, we must disobey the law of the Land and obey the Law of God. God, the giver of life and the giver of law, is the supreme Authority that defines everything else. 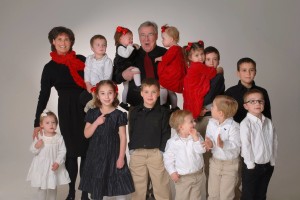 Rev. Francis Foucachon has a trio of passions—his faith, his family, and his food. He was trained to become a chef in the elite world of gastronomy in Lyon, France before being trained as a minister of the Gospel at the Reformed Seminary in Aix-en-Provence. He worked as a chef in France and Switzerland, and later created his own high-end restaurant in the USA. He was ordained in the Presbyterian Church in America in 1987, and ministered as a church planter in France and in Quebec for 24 years. Francis now works with Huguenot Heritage in partnership with Third Millennium Ministries. He and his wife Donna have five children and seventeen grandchildren.