Naturally I’ll begin my first post on a new blog by introducing myself. My name is Joffre Swait, and I work as the student and parent advisor at Kepler Education, a new online Classical Christian education platform and Roman Roads’ sister company. I am a language teacher, the son of an ESL teacher and a college professor. I was homeschooled in the nineties, and my wife and I homeschool our five children today.

Our two oldest children, Renata and Joffre Jr., have studied from Roman Roads’ Old Western Culture series for the last two years. They’ve enjoyed it, and my wife Kimberly and I have loved seeing the fruit of their studies. Kimberly has gotten to follow along a bit, but like many homeschooling parents (especially dads?), I’ve watched proudly from a remove while they studied the works I loved as a kid as well as great works I didn’t even know about then!

Now that I’ve come to work for Kepler, I’ve decided that I no longer have the excuse to put off what had been only a pleasant thought that would pop into my head when I’d overhear some of Wes Callihan’s baritone wafting into my home office from the living room TV. I’d think to myself, “That sounds like so much fun. If I studied with them I’d be able to talk even more about all this with kids. I really should make time to sit in on some of these.” Alas for the excuse of busy-ness that as a parent is so easy to trot out.

So now I have the grace of doing this as a part of my job. Do I blush? Do I chide myself for needing rose petals strewn across my path before I’d set off? I do. I do. But I hope I can redeem that by sharing with others my journey through Old Western Culture, The Greeks: The Epics. I hope it encourages you to participate in the curriculum with your kids, or maybe to do the next Great Books Challenge we do for parents!

I begin the journey by telling you about my response to the first couple of lessons.

The first two of The Epics have no readings. They both consist of a lecture with discussion questions from Wes Callihan, the man who made blue jeans and cowboy boots seem like they belonged in a library. He conveys his enthusiasm for his subject with gravel-voiced dignity. As much as the material in the course is great, I really think the crown jewel of the course’s presentation is Mr. Callihan. You can tell he has sailed these waters for most of his life, and that he loves being the expert pilot guiding the ship through the harbor. Watching those first couple of casual lectures woke up a little section of my brain that had been snoozing, and made me excited not only for the things I’m going to learn, but for all the rediscoveries I’m about to make and, hopefully, everything that will be reignited because of that.

Last week I’d have said that I love the Iliad, but the truth is I haven’t read it in fifteen years. Connections have started to drift apart. Now that I’m in my forties, and as I float off into online TV series and oh so much screen time, I more and more often find that when my mind reaches for an expression or phrase from the education of my youth, it comes back empty. One of my hopes for myself as I go through OWC is that it spark those connections back to life and hopefully extend them out. And as Mr. Callihan recounted the tale of the Judgment of Paris, not only did the story itself come rushing back to life, but a whole set of later works connected to it flooded to the front of my mind.

That’s one of the beautiful things that a Classical education provides…an abecedary with which to read the language of Western civilization’s cultural achievements great and small.

As Mr. Callihan told the story of Paris incognito stumbling into the party of quarreling goddesses, illustrated in the video by famous paintings of the scene, I thought of a 20th-century Mark Tansey painting called Judgment of Paris I. Tansey had several paintings that only made sense if one could look at them informed by a Classical education, and this painting is one of them. In it, a woman stands with her back to the viewer in the foreground, watching three men clamber over a bootcamp-style log wall in a display of athletic fitness. It’s an inversion of the sexes in the original story that invites us to examine the manner and worth of how men and women are judged. And whether you like the painting or not, it’s only interesting because of the direct connection to Homer’s story.

The other thing that I’m eager to see reawaken, and to see receive new seed, is the little phrases and tangentials that come not exactly from the same stories but from the same language, the same expressions. Like the phrase “red right hand of God”, which paints a picture of divine wrath, traveling from Latin to English, from Horace two thousand years ago to Milton in the 17th century to an Australian singer in the 20th. These little memetic are sometimes conscious, and sometimes not. As Mr. Callihan talked about the golden apple labeled “to the fairest”, a whole bunch of other apples, golden and otherwise, came tumbling out of the tree, just as I’m sure they are doing for you as you read this. Apples, apples everywhere, golden or otherwise!

The golden apples took me straight to a favorite science fiction story, Ray Bradbury’s Golden Apples of the Sun from 1953. It’s a short little story I discovered as a teenager, and that I loved for the title more than anything else. It’s about a spaceship trying to scoop golden starfire out of the sun. With an actual space scoop. Last year I read it out loud to the kids. The story’s title is taken from The Song of Wandering Aengus, a W. B. Yeats poem. It ends with

Though I am old with wandering
Through hollow lands and hilly lands,
I will find out where she has gone,
And kiss her lips and take her hands;
And walk among long dappled grass,
And pluck till time and times are done,
The silver apples of the moon,
The golden apples of the sun.

And because the poem’s about Angus, a figure of Irish mythology, we’re thinking about the Silver Bough and Golden Apples and suddenly about all the fairy tales and stories and myths of all the West. Apples are everywhere.

Of course, simply studying the Iliad doesn’t give you all of that. But that’s where it can start. Where it should start, I think.

So this is what I’m most looking forward to doing in this course, experiencing the reignition, the reconnections. I’d sort of forgotten what it was like to have the neurons firing broadly like that. I’m so specific these days when I read, but there’s a lot of breadth in going back to the basic memetic language of the West.

As this series progresses, I’m looking forward to talking about the story and characters, the curriculum itself, the oddities I’ll learn, the feel of the class. But the thing I’m most excited about is for these connections to continue. There’s going to be a bit of a rejuvenation effect as some of the neglected corners get aired out.

I’d love for you to comment below on what apples and other fruit in stories make you think of. Oh the writings and poems and paintings and songs that might come out of that orchard! 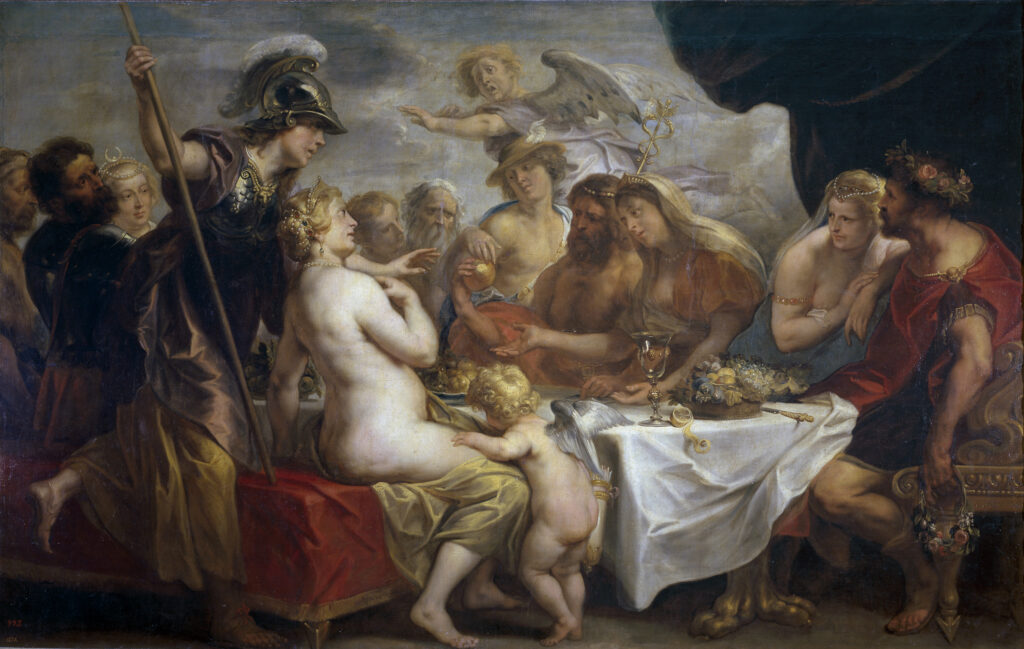