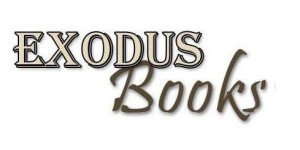 Exodus Books, a bookstore in Portland, as well as a large online reseller of curriculum, now carries the Old Western Culture curriculum, and wrote a review. The review (written by Caleb Crossman), was not only well-written and comprehensive, but very entertaining to read! Caleb shows his knowledge (and love) of the classics as he uses classical allusions throughout. Our favorite excerpt is when Wes Callihan is called a “benevolent centaur,” an allusion to Chiron, the centaur in Greek mythology who helped in the education of Achilles:

The mastermind behind Old Western Culture is Wesley Callihan, a veteran of Christian education. His presence hovers throughout the program like a benevolent, highly intelligent centaur: noble, serious, and wise.

We highly recommend the entire review! It’s an excellent overview of the curriculum.

A Christian Approach to the Great Books
by Caleb Crossman, for Exodus Books

Even those who love the Great Books can be overwhelmed by the number of courses based on them. As Classical-influenced education gains popularity in Christian and home school circles, curriculum centered on literature from the past has proliferated. But not all of it is created equal. 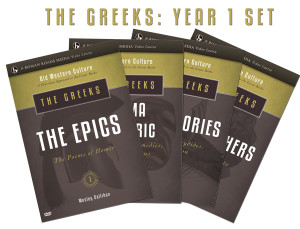 The number of such courses and the degrees to which they explain the literature of the past and why it matters make navigating them all a nightmare, or at least very frustrating. A quick survey of most of them reveals that they cover the same texts, in the same way, and at the same pace.

But what if there was a single program that adequately covered key texts of Western literature; that was well-written, accurate, and Christ-centered; and that didn’t just mimic all the other courses? Well, there is. Old Western Culture: A Christian Approach to the Great Books is everything other Classical-style courses wish they were.

How Do These Work?

The mastermind behind Old Western Culture is Wesley Callihan, a veteran of Christian education. His presence hovers throughout the program like a benevolent, highly intelligent centaur: noble, serious, and wise. At the center of the course is a series of lectures by Mr. Callihan, during which he presides from a leather throne in an imposing study, explaining great books and great ideas.

But enough of the rhetoric. This program is intended for high school students—there are four years of study, each with a series of lectures, readings in source literature, and workbook assignments relating to both the lectures and the source readings. Each year has been set up to accomodate a 36-week school year, with four 9-week terms. Daily lesson plans are included for each term, complete with reading assignments and when to watch the lectures (students should study about 2-3 hours per day).

There are four time periods covered, one per year: the Greeks, the Romans, Christendom, and the Moderns. Each 9-week term per year covers a different aspect of the respective time periods. For instance, the course on the Greeks is divided into four lecture series—The Epics, Drama and Lyric, The Histories, and The Philosophers.

All lectures are recorded on DVD. Students watch the lectures and answer workbook questions based on them (workbooks for each term are availalble in spiralbound print versions, as downloadable PDF files, or as printable PDF files on the course DVDs). Callihan delivers the lectures from a leather chair in an awesome study, and while there are occasional words, names and graphics that appear onscreen, the camera focuses primarily on Callihan intoning in his rich, warm voice. The lectures are not scripted—Callihan makes a point of not teaching from notes (learn why with this video).

Along with watching the lectures, students are to read the source texts under consideration. Every title is available for download in electronic form from the Romans Road website, though the producers strongly urge students to buy hard copies; Callihan reads from recommended translations, but you can use whatever accurate translation you like. There are also workbook questions related to the reading assignments.

Each term, students write a paper and complete a final exam included in PDF form on the DVDs (also downloadable at www.romansroadmedia.com). Every series of DVDs (one series for each term) also comes with a full-color pamphlet displaying and discussing various classic works of art based on the content of the coursework. There is some nudity and violence depicted in these paintings and sculptures, but nothing more extreme than what you’ll encounter in the source literature.

What sets Old Western Culture apart from other programs like it is the ability of Callihan to engage the content on a deep level and yet make it relatable and understandable for high school students. He doesn’t dance around difficult issues, doesn’t avoid difficult texts (there’s a lot of philosophy here), and succeeds in applying a biblical Christian worldview to the works considered.

A lot of time is spent evaluating plot elements, but it’s always with the intent of understanding what the author of the text was trying to say, not simply to help students learn the basics of plot analysis. The questions in the workbook, the readings, and especially the lectures all conspire to guide students toward a holistic approach to literature study.

This isn’t just about fiction, either. Callihan reads epics, novels, and poetry, as well as theology, philosophy, and history. The goal is to understand the background to our current society, grapple with the hard and perennial questions about life, God and the world, be formed by the thought of the giants of Western culture, and apply a Christian worldview to all of it.

So, it’s a great program. But why should we study the Great Books of Western civilization in the first place? Callihan quotes the great sage of our time, C. S. Lewis, as saying that the books of the past do what no modern book can: they provide us with a perspective radically different than our own. This perspective in turn helps us critique our own situation and look at it more objectively, from the standpoint of the wisdom of the ancients.

Fortunately, however, Callihan doesn’t idolize the past or its greatest thinkers and writers. One of the chief sins of courses like this is ascribing all manner of Christian ideology to men like Marcus Aurelius and Plato. Callihan doesn’t hesitate to show where the ancients (and early moderns) were right, but he also shows where and how they were wrong.

The course is comprehensive (for high schoolers), accessible, and easy to implement. Students can work alone, though it’s always helpful for kids to discuss what they learn with their parents. Because it involves a variety of learning methods (reading, writing, and watching/listening to lectures), students will internalize the content much more thoroughly than in more limited courses.

Of course, Old Western Culture isn’t perfect. There is one glaring shortcoming—where the program ends, and this is a failing that it shares with just about every other similar program out there. By ending with 19th-century moderns, the authors do a disservice to kids living in the 21st century: a lot of virulently anti-Christian philosophy has developed post-1900, and it would be an invaluable asset for young people to be guided through the morass.

Still, this is a great program. We really can’t recommend it enough, especially to those interested in Classical-style and Great Books education. Unlike Sonlight’s reading lists, these are more or less age appropriate; unlike Omnibus, Callihan doesn’t ask students to bite off more than they can chew. Ideal for college students and adults as well, Old Western Culture is one of the best products we offer for studying the humanities.