The Mass Extinction Nobody Talks About

Biologists have theorized that the earth has witnessed several mass extinction events—apocalyptic events in which as many as ninety percent of the earth’s animal species suddenly died off as a result of some abrupt change in climate. Some alarmists warn that another such mass extinction is going on even now. Whether there is any truth to this I cannot say, but I will take a page from their book with an alarmist claim of my own: we are in the middle of a mass extinction event of a sort—not of species, but of words and their meanings. This should be unsettling in the least to anyone. But for educators and parents who want a good education for their children, it is crucial not only to recognize this problem, but to take action.

Since the world of the twenty-first century changes around us so rapidly—decade by decade if not year by year, it is difficult to even comprehend the idea that humanity lived in basically the same way for at least four millennia—from the time of ancient Egypt, all the way until the eighteenth or nineteenth century. For example, people traveled by walking, carriage, horse, or boat. People communicated by sending written messages by messenger. Food was produced by plowing, planting, harvesting, and preserving at set times of year and was available according to those times. Clothing was produced by an arduous process of spinning fibrous plants or animal hair into thread, weaving it into cloth on a loom, dyeing it, and sewing it together with needle and thread. Wealth took the form of precious metals, precious stones, property, and livestock. The list could go on and on.

Beginning with the Industrial Revolution and intensifying with the Technological Revolution, the experience of human life has changed drastically. The new things that have taken the place of the old may just seem to be bigger, faster, better versions of the old, but they are more than that. Sure, automated transportation existed in the past, but it always required close familiarity with either animals or the ocean. (It is remarkable that the daintiest lady of the nineteenth century had more knowledge and experience with horses than most farmers today.) Although food was grown by the same basic processes, today it happens out of sight, out of mind: our children could easily grow up believing the food grows in grocery stores. Clothing is usually manufactured on the other side of the planet in obscure factories—we are not even allowed to see what goes on there. Wealth has become increasingly abstract, and it is even shown off in different forms. Fine clothing, jewelry, and attendants have largely been displaced as indicators of class.

We know things have changed a lot, and often for the better. So, what’s the point in bringing all this up? Although this remarkable transformation has brought us countless good things (advances in medicine to name one), it is also increasingly robbing us of the ability to relate to or even comprehend our own past. Literature, philosophy, history, and ideas are inextricably bound up in the world in which they were written. For several millennia, a person could simply pick up a translation of an ancient or medieval work and (for the most part) understand what it was talking about. This could happen only because the world worked in basically the same way. This, however, has changed.

Increasingly, children of the twenty-first century do not understand the vocabulary of the past, or at best have a hazy notion of its meaning. What was a javelin, or a talent, or a bulwark, or a litter? These things are no longer in use, and even their names are quickly being forgotten. What does petulant, or insolent, or impetuous, or meek even mean? These adjectives have been replaced by the vocabulary of modern psychology. What is the difference between covetousness, envy, spite, and jealousy or between pride, arrogance, pretention, and haughtiness? We don’t know because these are not categories we think in anymore.

This complete or partial loss of comprehension of old words and concepts places a barrier between us and all the literature of the past—most dangerously, between us and the Bible itself. Just take Christ’s parables as an example. Unshrunken cloth? Wineskins? Lampstands? Fig trees? Tares? Lost Sheep? Talents? Mustard Seeds? Although we may understand what such words mean generally, we usually do not know what the things they refer to are actually like. And that was Christ’s point! The kingdom of God is like these things. The parables are hardly unique in this respect. How many times do the Proverbs or the Psalms refer to the everyday realities of an ancient Israelite’s life? And how well will a young man of the twenty-first century—who has never farmed, never hunted, never built a house, never walked ten miles at once—be able to relate to what he reads there? Not so well, I’m afraid.

So then, is this mass extinction inevitable? Are the things of our past doomed to fade out of this world and be replaced by the likes of

? I don’t think so. Not without resistance. Not without a bitter fight to the end, at least. Many of us have joined a grand conservation effort to save all these endangered words and concepts, to make sure our kids can understand the Bible, to make sure they can read, love, and learn from old books from the likes of Homer and Vergil and Augustine and Shakespeare and even Jane Austen. We call this conservation effort Classical Christian Education. We read old books, learn old languages, and study the world as it once existed. We do not do these things because we are stuck in the past, but because we love our faith, our history, and our heritage. What better guides could we ever hope for in such a shifting present and uncertain future?

Tim Griffith is the fellow of classical languages at New Saint Andrews College. He oversees the College’s Latin program, directs the national Phaedrus Latin Composition Contest, and translates 16th-century Latin theological texts for Wenden House. He has dedicated the last fifteen years to learning how to teach Latin better, drawing heavily on the work of the great Latin educators of history such as Erasmus, Commenius, and W.H.D. Rouse. He is also the founder of Picta Dicta, An online learning platform specifically designed to assist teachers and home educators offer a Classical Education. Picta Dicta is available through Roman Roads Media. 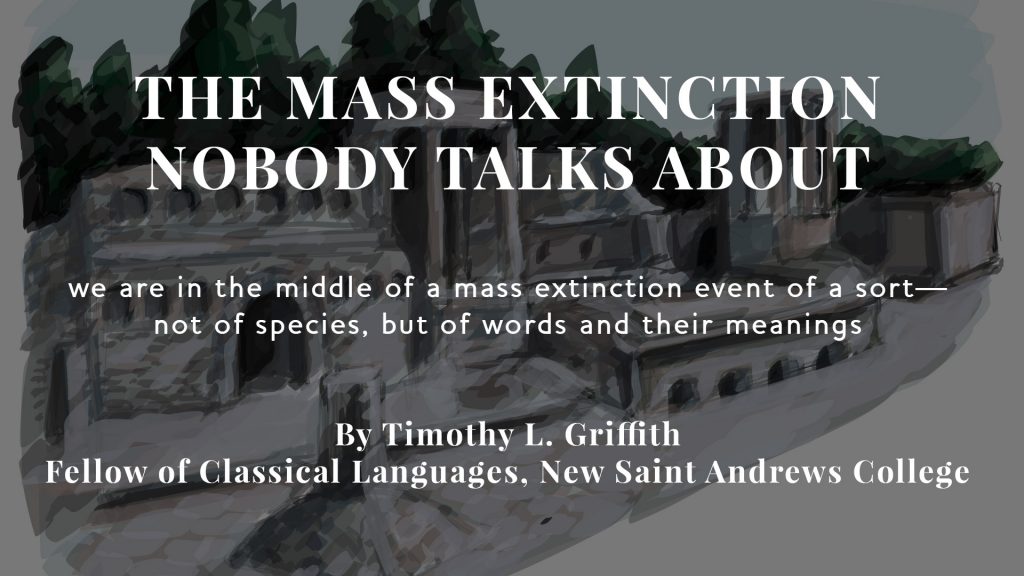