The Benefits of a Classical Education for…Car Design?

We can see the influences of ancient classical art all around us, from the symmetrical lines of early 19th century architecture and the imposing columns on government buildings, to the classically inspired clothing of Jane Austen’s day.

But have you ever heard of a classically-inspired car? I certainly hadn’t! However, while doing work for a project, I came across this 1929 Chrysler car advertisement: 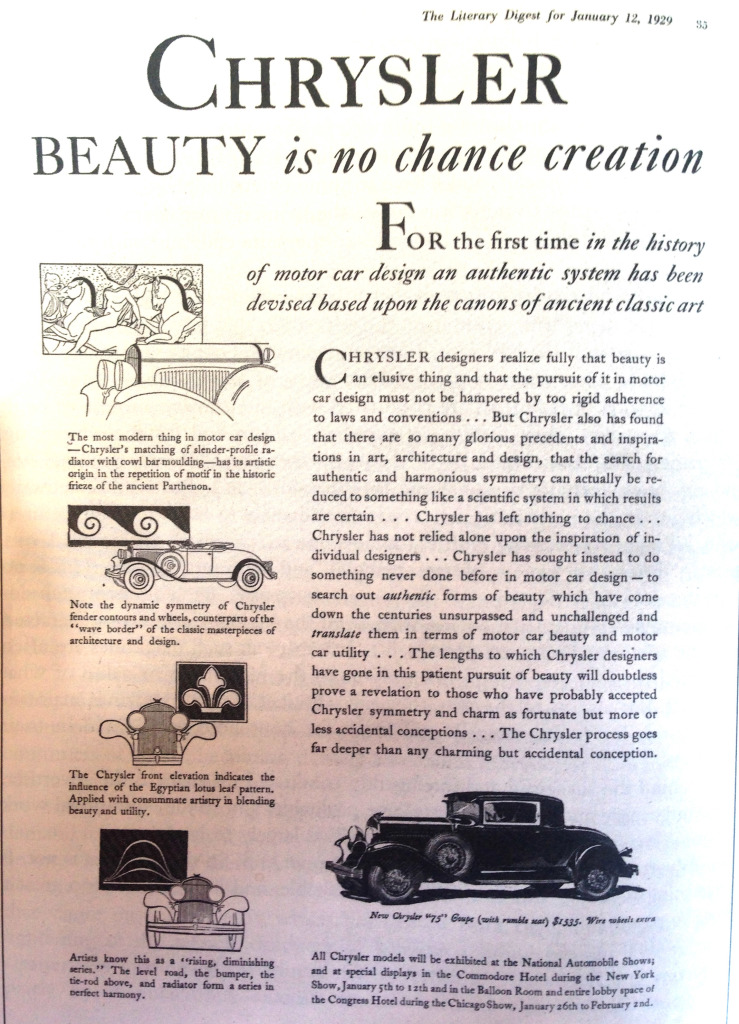 Yes, in the 1920s, Chrysler decided to look forward by looking back to the classical age for inspiration in the design of their elegant new Coupe. In this and its related ad, we find references to the Parthenon, Egyptian lotus leaf, and “wave border.” Rather than start from scratch with designers’ ideas, Chrysler, in good twentieth century spirit, has applied a “scientific” approach to finding the best aesthetic ideals from the “canons of ancient classic art.” And this is not an isolated case! Other car ads from this era reflect the same classical references, though some come across as comically contrived and forced.

But men in togas and ancient stone temples hardly seem to fit with the relatively-recent development of the automobile. Were the car marketers simply trying to make any possible appeal to an intellectually elite audience? Or cultivate a more rooted image ethos in the fast-growing market? Or was there something more widespread going on?

The clue lies in the popular artistic developments of the 1920s and 30s, the Art Deco movement. We can often pick out Art Deco by its iconic combinations of clean-cut lines, swirled curves and jagged straight lines that influenced architecture, interior design, and fashion after World War One. Car design rhetoric reflected the influences on the art of the time. Art Deco represented a bold new step away from the florid and busy Art Nouveau of earlier decades, yet “symbolically referenced ancient civilizations.” It seems that automobile customers were so aware of Art Deco’s classical connections that even the Vestal Virgins helped make some car sales!

Watch Chrysler trace the early history of man as it pertains to the development of the car, from a day when engineers were classically educated!

Next Week’s Friday Foray: What the Well-Dressed Roman-About-Town is Wearing